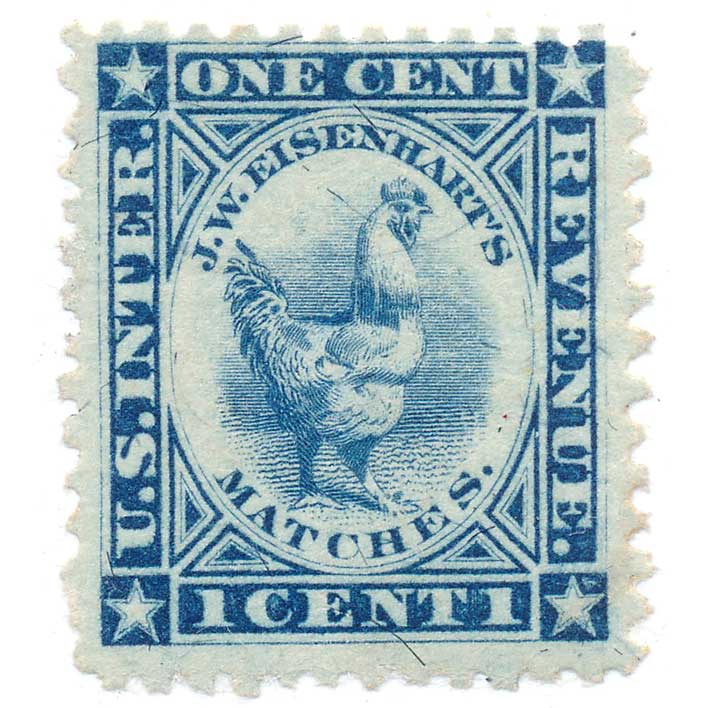 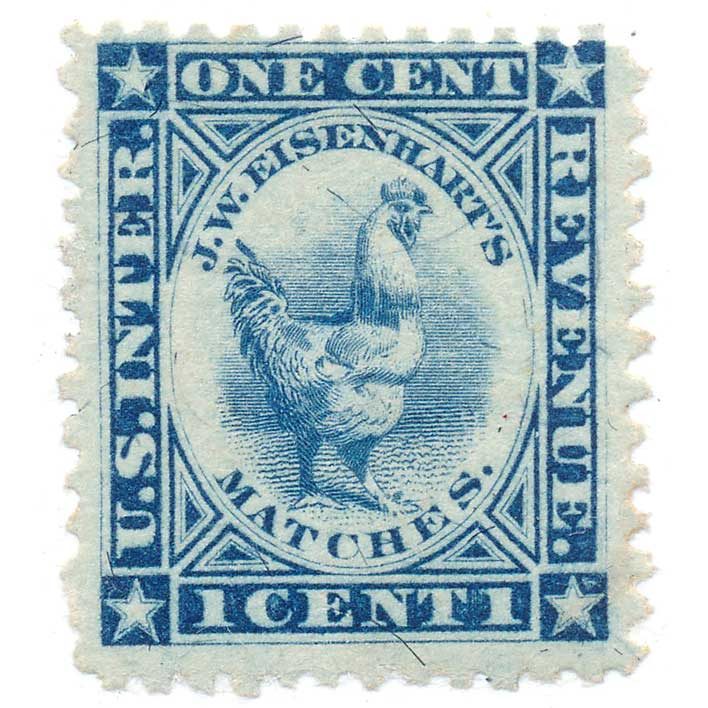 J. W. Eisenhart was the final custodian of the T. H. Alexander & Co. Matches die. It was altered to reflect the new owner.

This stamp might readily be mistaken for the rare blue Alexander’s, as the only difference is the change of name at the top of the central oval. It now reads “J. W. Eisenhart’s”. For many years the place where it was used was not generally known and the present writer has some recollection that at one time it was credited to Baltimore. Perhaps it was first used in that Maryland city, but such evidence as is available indicates that the entire issue was used where most of the stamps certainly were used—in York, Pennsylvania.

John W. Eisenhart lived in York for more than thirty years and in the York directory for 1877 the firm of J. W. Eisenhart & Co., match manufacturers, is listed, the address being on Queen Street near the railroad. About 1881 Mr. Eisenhart sold the match factory to the Diamond Match Co. who paid what was then considered to be a very generous price, and the York factory was closed to eliminate its competition. Apparently Mr. Eisenhart was not interested in a later enterprise called the York Match Co. but he was engaged in other businesses as late as 1907 and died not many years ago.

All the Eisenhart stamps on silk and pink paper and many of those on water marked paper were printed by the National Bank Note Co. from a plate engraved by that concern. The American Bank Note Co. also printed Eisenhart stamps on watermarked paper and possibly there was a final printing by the Bureau at Washington, although no specimens bearing the Bureau characteristics have been noted. The usual shade is a clear deep blue which seldom varies and differs little from that of the rare blue Alexander. Like its predecessors, the Eisenhart is not known to have been used in multiple and the few pairs or blocks seen on rare occasions probably were never used.

Before 1900 the pink paper variety was considered scarcer than the other two and for many years was priced 20c or 25c, while the silk paper and watermarked stamps were rated at 3c or 5c each. The standard catalog for 1900 surprised many collectors by raising the silk and pink papers to $1 each and the watermarked paper to 75c. The water marked variety was doubled to $1.50 in 1903 and there have been no other changes since. The Eisenhart’s are not particularly scarce and fortunately their condition averages better than many of the earlier match adhesives. They are so pretty and the rooster they bear is so life-like that fine copies are always in demand at close to catalog prices.