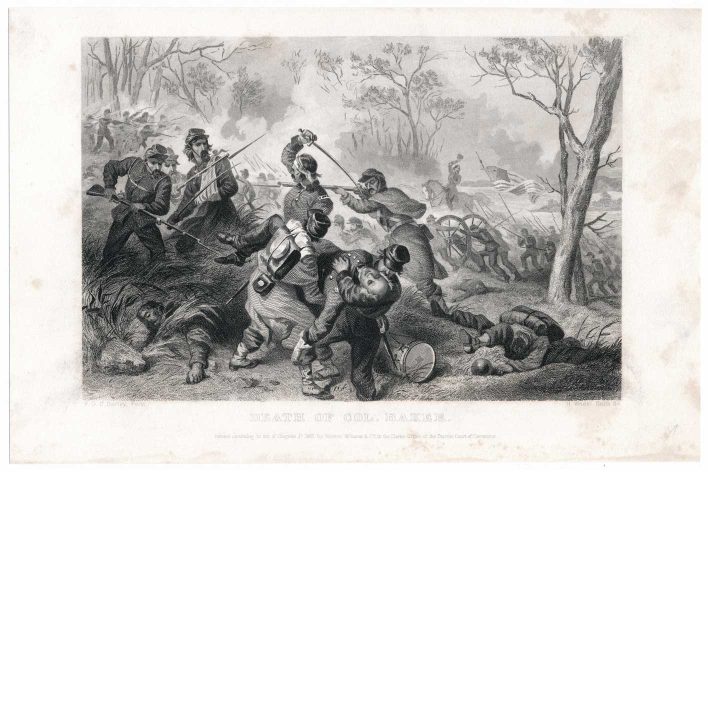 Death of Col. Baker at Ball’s Bluff (near Leesburg, Va.) Steel Engraving, c1862, H. Wright Smith after drawing by F.O.C. Darley. A number of publications were issued during the Civil War which included detailed engravings showing the battles and other events of the war.

In October, 1861, General McClellan, commander of the army around Washington, was interested in trying to take Leesburg, on the southern side of the Potomac and so he ordered General George P. Stone to “keep a good lookout upon Leesburg” and to “make a slight demonstration” there to perhaps move the Confederates out. On October 21, Union forces crossed the Potomac by Ball’s Bluff, where they were set upon by Confederate troops. Thus began the Battle of Ball’s Bluff, also called the Battle of Harrison’s Island, or by the Confederates, the Battle of Leesburg.
The Union forces eventually took a defensive position on a hill just above the Potomac. Called Ball’s Bluff, this hill ran down to the river over a high bank to a narrow beach across from Harrison’s Island. The Union troops were pressed hard and soon were forced to retreat down the steep bank. Not enough craft were available to ferry the wounded and soldiers across the Potomac, and as their position was continually under fire, the frightened men soon panicked, many trying to swim across the river. The swift current took many away, and more were drowned than shot. Out of a force of about 1,780, more than 300 died and 800 were wounded, captured or missing. Among those killed was Colonel Edward Baker, a sitting Senator from Oregon and a good friend and former law partner to Abraham Lincoln.

Born in Philadelphia, Pennsylvania, Felix Octavius Carr Darley began drawing in his youth. He moved to New York City, New York in 1848 and in 1850 he was invited to illustrate Washington Irving’s works ‘The Legend of Sleepy Hollow’ and ‘Rip Van Winkle’. He continued to illustrate works by Washington Irving but added James Fenimore Cooper, Nathaniel Hawthorne, Longfellow, James Whitcomb Riley, and Charles Dickens, to his client list. He also designed bank notes and bonds for the U.S. government. His work helped popularize icons such as the Pilgrim, the Pioneer, the Minuteman and the Yankee Peddler. He became one of the best-known illustrators of his time, so great was the demand for Darley’s work that new books were promoted as illustrated by Darley. The Philadelphia Inquirer noted that Darley “dominated American illustration for nearly a half-century.”

Note: this is an ORIGINAL nineteenth century engraving; not a reproduction or contemporary print. Your satisfaction is guaranteed.